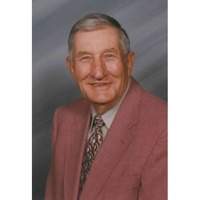 Winfred was born October 29, 1925 in Nancy, KY. He was the son of the late Carthal Compton and Lela Coner Compton. He was a Navy Veteran and served in World War II on the USS Mission Bay. He married Eula “Pauline” Hunley Compton on November 27, 1947. They were married over 72 years before her passing in 2020.

Winfred was a lifelong farmer, drove a school bus for many years, and was later the store manager for Compton Tile in Somerset. He also served as chairman of the Western Pulaski Water Board and was a member of Burnetta Baptist Church where he served as treasurer and a deacon for over 50 years.

He was preceded in death by his wife Pauline, his son Larry W. Compton, and brothers Kenneth Compton, Robert Compton, and Herman Compton.

Winfred loved to hunt and fish in his younger days, read Westerns, play cards, hunt ginseng, and watch UK sports. He and Pauline liked to travel, and enjoyed many vacations to Western states, as well as near-by places with their friends.

The Funeral service will follow on Wednesday at 1:00 p.m. with Bro. Vola Brown officiating. Burial will be at Lakeside Memorial Gardens. Pallbearers will be Jeremy Compton, David Compton, Billy Coner, Doug McLearen, Jonathan Wilson, and Stevie Ryan. Military Honors will be conducted by the American Legion Post #38 Honor Guard.