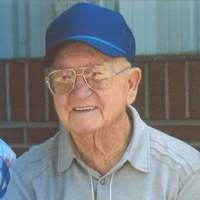 He was born on September 25, 1924 in Jonesboro, Arkansas to the late Otis Faulkner and Vivian Nelson Faulkner.  He retired from Chrysler in Dayton, OH after thirty years of service.  Bill enjoyed fishing and woodworking.

He is survived by his wife, Orpha Wilson Faulkner, whom he married on July 19, 1984 at White Oak Church in Nancy, KY; one son, Jerry McClendon (Cindy Keeney) of Nancy, KY; one daughter, Velda Martin of Somerset; eleven grandchildren, twenty great-grandchildren, and four great-great grandchildren; and one niece, Keely (and Rob) Richardson of West Manchester, OH.

Along with his parents he was preceded in death by one sister, Patsy Smittle; one son, Donnie (Nancy) McClendon; and one nephew, Kevin Smittle.

Visitation will be on Thursday, February 14, 2019 after 6:00pm at Lake Cumberland Funeral Home.

His funeral service will be held on Friday, February 15, 2019 at 11:00am at the Chapel of Lake Cumberland Funeral Home with Bro. Josh McClendon officiating.  Burial will be at Lakeside Memorial Gardens.

Lake Cumberland Funeral Home is entrusted with the arrangements for William “Bill” Faulkner.