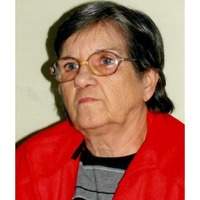 Sylvia Ping, 83 of Jabez, KY departed this life on Saturday, December 28, 2019 at Golden Years Nursing Home in Wayne County, KY.
Sylvia was born on March 27, 1936 in the Jabez Community to the late Carson and Lily McGowan Moran.
She was a seamstress at Cowdens in Stanford for eighteen years and housekeeping for ten years at Oakwood in Someret, KY.
She is survived by; a daughter, Cathy King of Somerset, KY; a son, Jeff Huff of Somerset, KY; two brothers, Roger (and Pat) Moran of Indiana and Phillip (and Loretta) Moran of Somerset, KY; one sister, Alta Zimmerman of Jamestown, KY; nine grandchildren, Jason Huff, Christie Swartz, Josh Shepard, Kinsley Huff, Tabitha Richardson, Cassandra Cornett, Haelee Schmitt, Sarah Watkins and Rebecca Watkins; seven great grandchildren, and 2 great great grandchildren.
Other than her parents,s he was also preceded in death by; one son,Steve Huff; three brothers, George Moran, Woodrow Moran, and Lindsey Moran and two sisters, Leva Clottfeltner and Linda Davis.
A funeral service for Sylvia Ping will be held at 1:00 p.m. Thursday, January 2, 2019 at the Chapel of the Pulaski Funeral Home with Bro. Jerry Burnett officiating. Burial will follow at Lakeside Memorial Gardens.
The family of Sylvia Ping will receive friends at the Pulaski Funeral Home from 11:00 am Thursday until time for services.
In lieu of flowers the family requests expressions of sympathy to Alzhiemers Respite Center.
Pulaski Funeral Home is honored to be serving the family of Sylvia Ping a this time