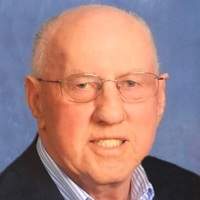 Roy was born on October 8, 1934 in Flat Woods, KY to the late Jacob Garner and Lola Compton Garner.  He was a former owner/operator of Wilbert Vault Company for many years and was one of the original founders of Lake Cumberland Funeral Home.  Roy was also a former owner of Jerry’s Restaurant, several Save-A-Lots and Hotel franchises.  He served on the Advisory Board of Citizens National Bank.  Roy was always involved in politics and especially loved local and state politics.  He attended First Christian Church.  Roy was a United States Army Veteran and member of Somerset Masonic Lodge #111.

He is survived by his wife, Joel Andra Garner of Somerset; one son, Roger V. (and Stephanie) Garner of Jeffersonville, IN; one daughter, Lisa Garner Rogers of Somerset; one stepdaughter, Andrea (and Marty) Taylor of Somerset; two grandchildren, Joshua Reed Garner of Virginia Beach, VA and Madison Lenora Garner of Jeffersonville, IN; a brother-in-law, Bruce (and Robin) Orwin of Somerset; sisters-in-law, Betty Garner of Nancy, Bernice Garner of Nancy, Pam Orwin (and Jarl) Mohn of Brentwood, CA, Jill (and Richard) Hamilton of Georgetown, KY and Phyllis Orwin Lawson of Somerset; two very special caregivers, Sherry Harrison and Betty Owens; his former wife, Juanita Dykes Garner; several nieces and nephews, including a special nephew, Kenneth (and Melanie) Wasson of Talmadge, OH ; and many other family members and friends, who all loved him dearly.

Along with his parents he was preceded in death by five brothers, Hubert, Arvis, Rob, Howard and Jacob Verl; five sisters, Alta, Helen, Peggy, Grace and Louise; his first wife, Lenora Ruth Garner, who preceded him on October 9, 1979; and a stepson, Jonathon Thomas.

In lieu of flowers, the family requests expressions of sympathy be made to Hospice of Lake Cumberland in memory of Roy Garner.

Lake Cumberland Funeral Home is entrusted with the arrangements for Roy Garner.