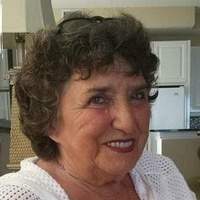 Nellie White of Science Hill, KY passed from this life to the next on Mother's Day, May 12, 2019 just forty-one days after her 83rd birthday. She was surrounded by her family and friends, very fitting as these were most important to her life.

Nellie often said that all she ever wanted to be was a mommy. She excelled in this role in her life. She married Jacky White in 1959 and they raised three children Jeff (Trish) White of Glasgow, KY; Chuck (Tina) White of Somerset, KY; and Jackie Lynn White Rogers of Somerset, KY.

But Nellie White was also more than a mother, she was also a loving wife, a special grandmother, an aunt who loves her nieces and nephews as if they were her own, a sister-in-law, a successful business owner of Nell's Tax Service, a lifetime member of First Baptist church in Science Hill, a lover of the open road, a champion of the underdog, one who enjoyed a good bargain, and of course a loyal and strong friend to so many.

She was preceded in death by her mother and father, Charley and Tiny White, as well as her siblings: Ancil White, Lewis (Emma) White, and Mary Bell and her nephew, Wayne Sowder. She is survived by all three of her children and her grandchildren. Haley (Zack) Maynard was a joy in her Granny's life and the two of them shared a similar sense of humor and a love for adventure. She is also survived by Michael Mayfield and Sunni Grossl.

A special love and bond with her nieces and nephews and their children also remains. Margie (Andy) Kardeen of Louisville was the first baby in her life and she swore she could never love her own children as much, but her love only increased as her family grew. Jennie (Wendell) McQueen of Somerset, a constant in her life and with her until the end. Calvin (Angela) Bell of Northern KY, Fran (Scott) Troxtel of Science Hill, and Kurtis Bell of Science Hill and all of their children were such a joy to Nellie. Kathy (Danny) Hines of Science Hill and their boys also shared a special place in her heart.

Nellie is also survived by her sister-in-law and brothers-in-law: Judy (Bob) Brock of Florence, KY,. Joey (Nancy) White of Cincinnati, Beecher (Karen) White of Alexandria, KY. Bobby (Patye) White of Lawrenceburg, all of whom showered her with love and laughter since they met her over 60 years ago.

A Funeral Service will be held 11:00 AM Thursday, May 16, 2019 at the Chapel of Morris & Hislope Funeral Home with Bro. Ed Massey officiating.

Burial will be at Lakeside Memorial Gardens in Somerset.