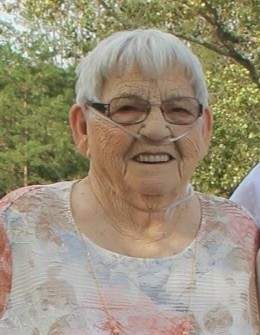 Lucreta Eads, of Russell Springs, passed away on Tuesday, September 7, 2021, at the Jean Waddle Care Center in Somerset, Kentucky. She was 87 years of age.

Born June 25, 1934 in Pulaski County, she was the daughter of the late Oscar and Della Hall Godsey. Lucreta was a homemaker, member of Jennie’s Chapel United Methodist Church, and helped to babysit her grandchildren. She was always very friendly to everyone she met and was liked by all who knew her.

In addition to her parents, Lucreta was preceded in death by her husband, James Eads, who passed away on September 14, 2007; six brothers; two sisters; and a son-in-law, Michael Lawless.

Funeral services will be held at 1:00 P.M. on Friday, September 10, 2021, at Bernard Funeral Home with Brother Glen Richardson officiating. Burial will follow at Lakeside Memorial Gardens in Somerset.

In lieu of flowers, the family requests that memorial contributions be made to Hospice of Lake Cumberland, 100 Parkway Drive, Somerset, KY 42503.

Funeral arrangements for Lucreta are entrusted to Bernard Funeral Home. An online guestbook is available at www.bernardfuneralhome.com