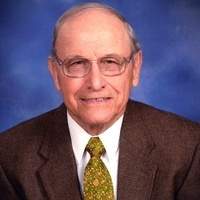 Joe was born on August 15, 1929, in Somerset, son of William Hobert and Amanda Alexander Van Hook. He was a member of the Somerset High School graduating class of 1947. Joe graduated from the University of Kentucky in 1952 with a Bachelor of Science degree in Agriculture. He served in the United States Air Force from October 1952 through October 1956 and was stationed at Walker Air Force Base in Roswell, NM. Joe married Mary Lou Dungan on January 2, 1955 at the Science Hill Christian Church in Science Hill, KY. Joe and Mary Lou lived in Roswell, NM, Danville, Marion, and Morganfield, KY before moving their family to Madisonville, KY in 1964, where they lived until 2008.

Joe spent the bulk of his career with the United States Department of Agriculture, serving as both County and District Directors for the Agricultural Stabilization and Conservation Service. He was very active in the First Baptist Church of Madisonville, serving as a deacon and Sunday School teacher for many years. As a very active Gideon, Joe regularly ministered to those incarcerated at the local jail in Madisonville. He also was a member of the Kiwanis Club. In 2008, Joe and Mary Lou moved back to Somerset, where Joe was a devoted caregiver to Mary Lou. After Mary Lou's passing in 2009, Joe volunteered regularly at God's Food Pantry and became much more active in the First Baptist Church of Somerset and with the Gideons. For several years until his death, on Sundays he taught Sunday School at both The Neighborhood and the First Baptist Church of Somerset.

Joe loved to read and was an avid history buff, with a special interest in the Civil War and World War II. He also loved to travel, would rarely miss watching a University of Kentucky basketball or football game, and simply enjoyed life. He dearly loved his extended family in Somerset, who for years provided incredible support, companionship, fun times, and amazing care.

A Celebration of the Life of Joseph Curtis Van Hook will be held on Saturday, September 30, 2017, at 11:00 a.m., at the First Baptist Church of Somerset, with Dr. French Harmon officiating.

A visitation will be held on Saturday, September 30, 2017, beginning at 9:00 a.m. until time for the service, at the First Baptist Church.

Military Honors will be conducted by the Wright Patterson Air Force Base Honor Guard. Interment will be in Lakeside Memorial Gardens.

The family requests donations be made to the Gideons or the First Baptist Church of Somerset, in lieu of flowers.