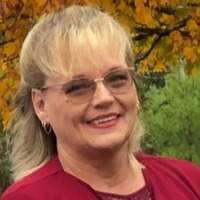 JoAnn Dick, age 53, of Nancy, KY passed away on Tuesday, May 3, 2022 at her home surrounded by family and her little dog, Bandit.

JoAnn was born on January 3, 1969 in Somerset, KY to Judy Fox Pendleton. She was a graduate of Casey County High School and a graduate of Somerset Community College in 1990. She attended White Oak Baptist Church in Nancy, KY. JoAnn was a homemaker and a farmer. She loved her family and loved being a full time Nana to her “grandbabies”.

Her funeral service will follow on Saturday, May 7, 2022 at 11:00am at the Chapel of Lake Cumberland Funeral Home with Bro. Larry Butte officiating. Burial will be at Lakeside Memorial Gardens. Pallbearers will be Bobby West, Scott Pierce, Chris Pierce, Jason Turpen, John Fox, and Noah McMillian.