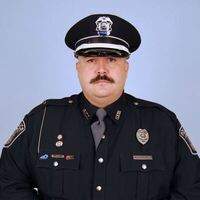 Jeff was born on April 26, 1967 to the late William Robert Girdler and Ella Wells Girdler.  He was a member of New Enterprise Baptist Church.  He was a former Army Reservist, a retired Somerset Police Officer with over twenty years of service.  During that time his duties included Patrolman and Post 516 Explorer Advisor, Firing Range Instructor, Accident Reconstruction Specialist and School Resource Officer.  Jeff was one of the founding members of Somernites Cruise and G3 Firearms. He loved yardwork, cars, working with the public and hanging out with his wife and four-legged friends.

He is survived by his wife, Connie Jo McGuire Girdler; one brother, Jerry Wayne Girdler of Somerset; and many aunts, uncles, cousins and friends.

Along with his parents he was preceded in death by one son, Connor McGuire Girdler; one brother, John Andy Girdler.

His funeral service will follow on Sunday at 2:00pm at the Chapel of Lake Cumberland Funeral Home with Bro. Bradley Goforth and Chaplain Richard Allen officiating.  Burial will be Tuesday, February 23, 2021 at 2:00pm at Lakeside Memorial Gardens with Bro. Rick Lawson officiating and a Flag presentation by the Somerset Police Honor Guard.

The family requests expressions of sympathy be made to the Somerset Police Department (SPD) Benevolence Fund to be used for children in need.  Please make checks payable to the City of Somerset and in the memo: SPD Benevolence Fund.  The checks can be mailed to Lake Cumberland Funeral Home, P.O. Box 1441, Somerset, KY 42502.