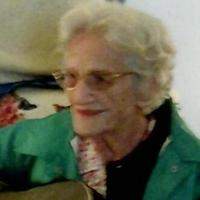 Ida Mae Compton, 98, of Somerset, passed away on Tuesday, February 18, 2020 at the Lake Cumberland Regional Hospital.

She was born in Pulaski Co., on April 19, 1921; daughter of the late Calvin and Alice Angel Moore.

She was preceded in death by her brothers, Albert, Jessie, Louis, Minot, Henry, Jilce, Mark, John, and Jack; and two sisters, Dorothy, and Maudie.

A funeral service will be held at 11:30 AM Saturday, February 22, 2020 at the chapel of Morris & Hislope Funeral Home with Bro. Charles Bullock officiating.

Visitation will be after 9 AM Saturday, February 22, 2020 until time for services.

Morris & Hislope Funeral Home is in charge of arrangements.