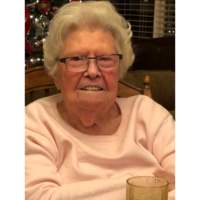 Georgia was born on January 11, 1921 in Grays, KY to the late Parks Brittain Davenport and Eliza McVay Davenport.  She was a member of the Somerset Nazarene Church.  Georgia was well known for being a seamstress and doing upholstery work.  She was a Riveter in the Navy yards in Baltimore.

Along with her parents she was preceded in death by her husband, Zearn Stringer, whom she married on June 10, 1940 in Harlan, KY and he preceded her on August 9, 2004; one son, Frank B. Stringer; her brothers and sisters, Bill Davenport, Maggie Findley, Jess Davenport, Hadly Davenport, Kathlene Hensley, Marie Asbury and Denver Davenport; one son-in-law, Anthony Owens; and one grandson-in-law, George Mouring.