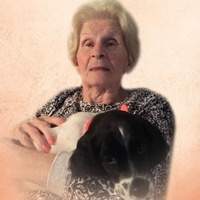 Dora Christine Flynn, 91, a longtime resident of Bronston ,KY went home with the Lord on August 22, 2017 in North Branch, Michigan . She was surrounded and cared for by three generations of her family in the comfort of her home. Christine was born on November 1, 1925 to Robert and Stella Colyer Flynn of Bronston KY.

Christine retired from St. Joesph's Mercy Hospital in Pontiac Michigan with 25 years of service. She then earned her degree in accounting, at the age of 50, from Oakland Community College. She worked at H&R Block as a tax preparer until 1999 and was a caregiver for the elderly until the age of 89. She was a member of the Rochester Hills Baptist Church in Rochester, Michigan.


Christine is survived by her children, Roberta and Larry Thaxton of Bristol TN, Elsie Jean and Gary Hardwick of Spiceland, IN, Sam and Judy Flynn, III of Bronston, KY, Wayne and Shirley Flynn of Kokomo IN, Paul and Charlotte Gwen Flynn of North Branch, MI, and Laura LaRue and Diane Bickers of Shelbyville KY. She is also survived by her brother Rusty (Glen Allen) and Joyce Flynn of Indiana. Christine had 13 Grandchildren, 31 Great-Grandchildren and 10 Great -Great Grandchildren.


For those of us that knew Christine, those that called her Mother, Sister, Grandma, Great-Grandma, or friend - her passing leaves us with a tremendous sense of loss. But Christine would not have time for that. She enriched her community and our lives, crocheting blankets for churches and nursing homes and finding suitcases for foster children. She was a lifetime gardener, reader, a handmade quilt artist and devote Christian. She inspired four generations with her resilience, openness, positive attitude, tireless work ethic, and the giving the advice of God Doesn't Make Any Mistakes.


Services will be held on Friday, August 25, 2017 at 1:00 pm at the Chapel of Somerset Undertaking Company and Crematory followed by entombment at Lakeside Memorial Gardens in Somerset, KY. Pastor Josh Wesley will officiate. Visitation will precede the service from 10:00 am until 1:00 pm.


You may sign the online register book and leave condolences for the family at www.somersetundertaking.com.


The family request that expressions of sympathy take form of contributions to the Quinton Cemetery Fund.


Somerset Undertaking Company and Crematory is in charge of arrangements.