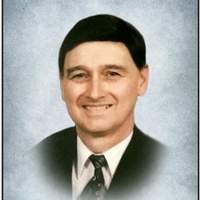 Donald Lee Duell, age 74, of Somerset, passed away on Tuesday, August 15, 2017, at Fountain Circle Health and Rehabilitation Facility, in Winchester.

Donald was born on April 2, 1943, in Hodgenville, son of the late Henry and Zelma Corum Duell. He was a graduate of University of Kentucky. Donald married Bonnie Divine, on December 22, 1964. He was a data processor for First and Farmers Bank, Citizens Bank and N.C.R. Corporation before his 36-year career with Southern Belle Dairy. Donald was a past Somerset Rotary Club member. He was a long time, active member of First Baptist Church of Somerset, serving for years as a deacon, Sunday School Director and Sunday School teacher.

Donald is preceded in death by his parents.

A Celebration of the Life of Donald Lee Duell will be held on Friday, August 18, 2017, at 11:00 a.m., at First Baptist Church of Somerset, with Dr. French Harmon officiating. There will be a visitation beginning at 10:00 a.m., Friday, prior to service time. Interment will be in Lakeside Memorial Gardens.

In lieu of flowers, the family requests donations to First Baptist Church of Somerset, or to the Gideons International.