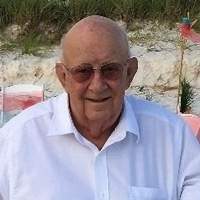 Don was born on January 14, 1932 to the late Willie Lawrence and Mildred Marie Marsee Bishop and was raised in the Pulaski County community of Science Hill. He attended and graduated from Science Hill School.

In October 1951, he married Betty Ruth Owens of the Mt. Zion community.

In January of 1952, he answered the call of his country, to serve in the United Stated Army. He was stationed in Germany during the Korean War.

To the blessed union of Don and Betty were born two daughters, Rita Bishop of Somerset and Sherry & (Michael) McClanahan of Paris, KY.

In 1963, Don and Betty moved from Somerset to Paris, KY, where they lived for 31 years. Don worked as a printing press operator for the Paris Daily Enterprise (a local newspaper) for several years. He later taught Graphic Arts for a vocational school in Fayette County, a position from which he retired. In 1994, he and Betty returned "home" to Somerset to enjoy their retirement years near Lake Cumberland.

His loving wife, Betty, preceded him in death in February of 2012, after a long battle with ALS. They celebrated 60 years together!

Other than his daughters, Don is survived by seven grandchildren: Tara & (Michael) Ray and D.J. Hutchison, all of Somerset; Lee Hutchison, Lucas & (Brittany) Humphries, and Julie Humphries, all of Paris; Jana Hayes of Lexington; and Lana & (Johnny) Lunsford of Norfolk, VA. Also surviving are four great-grandchildren, Audrey Humphries of Monticello, KY; Jaxson, Izzy and Hogan Ray of Somerset.

Besides his wife, Don was preceded in death by a brother-in-law, Ronald "Bull" Dalton.

Donald was a member of the Science Hill Church of Christ. He dedicated his life in service to his Lord. He taught numerous Bible classes, led singing, and was an active leader in each congregation where he attended, including serving as an elder at Liberty Road Church of Christ in Lexington, KY for several years.

In addition to church activities, Don was also an avid fan of the UK Wildcats, rarely missing a televised game! He also loved spending time with family, beach vacations, eating out, watching TV, and Facebooking! He was always ready with a cunning remark, and enjoyed "joking around" with everyone he met. His leadership, wisdom, and genuine concern for his fellow man will be greatly missed, and he will be sadly mourned by all who knew him.

A funeral service will be held at 11 AM Wednesday, January 24, 2018 at Morris & Hislope Funeral Home with Bro. Scott Eubank officiating.

Visitation will be after 5 PM Tuesday at Morris & Hislope Funeral Home.

In lieu of flowers, contributions may be made to the Science Hill Church of Christ, P.O. Box 556, Science Hill, KY 42553.