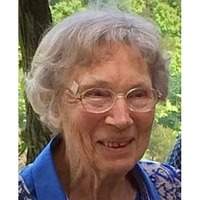 Christine Brock Muse, having attained the age of 95 years, passed from this life at her home and entered her heavenly home to spend eternity with her Lord and Savior on January 6, 2021.

Born April 11, 1925, in Trimble, Kentucky.  She was the daughter of the late Everett and Grace Barker Brock.

Christine attended Oak Grove Baptist Church as a young girl with her parents, but later became a member at Delmar Nazarene Church where she taught Sunday School, VBS, and assisted in many other events.  She loved living on the farm with her sweetheart, Lindel, being a homemaker, and raising her six children.  She occupied her time with reading, growing flowers, gardening, sewing, needlework, including her joy of cooking and serving family and friends. She always insisted for everyone to eat at their table.

Memorial contributions may be made to Gideons International or Hospice of Lake Cumberland.