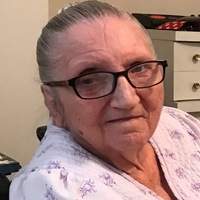 Emma Christine Farmer, age 89, passed away at her residence on March 7, 2021. She was born on June 26, 1931 to Henry and Nannie Adams Vaught at Bobtown, KY and they preceded her in death.
She married Charlie Leo Farmer, the love of her life, on December 18, 1951 in Somerset, KY, he preceded her in death on September 19, 1999. She was an Army wife and went with her husband where ever he was stationed throughout his military career. They retired back to Somerset, KY. Together they were blessed with; three children, Kay Lamkin of Somerset, KY, Debbie (and Rick) Hardwick of Somerset, KY, and Wanda Gossett of Whitley City, KY all children survive. Other survivors include the following grandchildren, Samantha Baker of Science Hill, KY, Charlie Russell (and Alisa) of Somerset, Allen Burton (and his fiancee, Karol Mattingly) of Somerset, Mandy Burton (and her fiancee, Joey Thompson) of Cameron, NC, Emmy Sumner (and Derek) of Whitley City, also surviving is; one sister, Ruth (and Vonis) Brinson; one brother, Paul (and Paula) Vaught; one sister-in-law, Oma Vaught; fifteen great grandchildren and seven great great grandchildren She also leaves a host of other relatives and friends who mourn her passing.
Other than her parents, and husband. She was also preceded in death by; one brother, Glen Vaught, and granddaughter, Christina Thornton and a best friend, Margie Wilson.
She enjoyed reading her bible and quilting, The hearts of the family are broken but they know she is happy to be with Jesus and her loved ones who have gone on before. She was the most compassionate and kind person to everyone she met.
A private funeral service for the family will be held at 11:00 a.m. Thursday, March 11, 2021 at the Pulaski Funeral Home with burial to follow in the Lakeside Memorial Gardens.
The service will be live streamed via Pulaski Funeral Homes Facebook page beginning at 11:00 a.m. Thursday, March 11.
Pulaski Funeral Home is honored to be assisting the family of Mrs. Emma Christine Farmer.