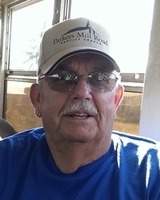 Billy was born on September 15, 1942 in Faubush, KY to the late Hubert Wilson and Bonnie Davis Wilson.  He was a member and deacon of Parkers Mill Road Baptist Church.  Billy retired as a Welding teacher from Somerset Vocational and Technical School.

He is survived by his wife, Shirley Mayfield Wilson, whom he married on August 14, 1965 at Slate Branch Baptist Church; his daughter, Tawnya Oberman (Tyler) of Lancaster; and three grandchildren, Mary Katherine Oberman-Griffin (Jordan), William Oberman and Clayton Oberman.

Along with his parents he was preceded in death by one son, Spencer Wilson.

His funeral service will follow on Tuesday at 1:00pm at the Chapel of Lake Cumberland Funeral Home with Bro. Darry Hatfield officiating.  Burial will be at Lakeside Memorial Gardens.  Pallbearers will be Tyler Oberman, William Oberman, Clayton Oberman, Jordan Griffin, Rick Simpson and Travis Taylor.