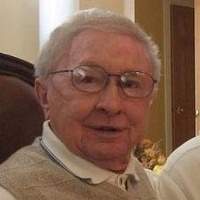 Arthur Clinton Patterson, age 95 went to his heavenly home October 21, 2017 at the Danville Center of Nursing and Rehabilitation in Danville, Kentucky.

Arthur was born to the late Roscoe and Willie Myrtle Mills Patterson on August 26, 1922. He loved meeting people and making new friends which he did through the years being a school teacher and farmer. He was a WWII veteran and also a member of the Sardis United Methodist Church.

Pallbears will be his grandsons and two great-grandsons.

A funeral service will be held at 11 AM Tuesday October 24, 2017 at the chapel of Pulaski Funeral Home.

The family request expressions of sympathy be made to the Gideon Memorial Bible Plan.

Pulaski Funeral Home is in charge of arrangments